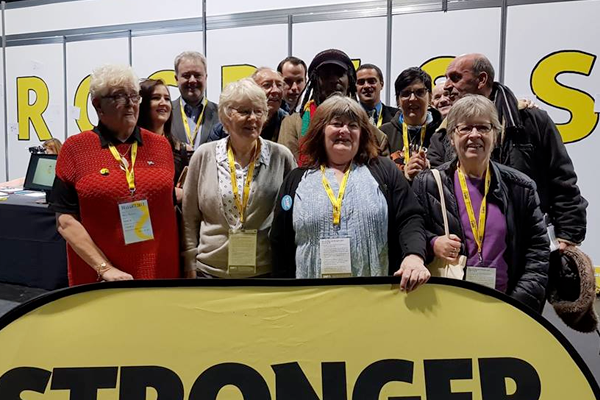 After last years successful party and quiz we have decided to do it all over again! The quiz is going to be hotly contested by teams from all over Glasgow so make sure and get your tickets. £5 waged or £3unwaged. Email: contact@snpmaryhillspringburn.scot to reserve yours! It all starts at 7 pm on the 7th of December at Maryhill Juniors. 18 Lochburn Road, G20 9AQ. If you would like to donate to the raffle then please email:contact@snpmaryhillspringburn.scot

We were delighted to welcome top blogger Wee Ginger Dug and his human companion Paul Kavanagh to Maryhill and Springburn as we kicked off the first in our series of political discussions. The dug and Paul led a wide and varied discussion on a number of topics, independence being the main one! We will be continuing with more of these discussions so keep checking your emails to see who comes to visit us next! You can read their excellent blog at weegingerdug.wordpress.com/

Maryhill and Springburn At Conference 2017!

Maryhill and Springburn were well represented by our delegates and visitors at Annual conference this year and it was with great delight that we saw fellow member Aonghas Mac Leòid re-elected to his role as National Secretary. Along with Aonghas, we were also very pleased to see Cllr Christina Cannon elected to the National Executive. It didn't stop there for us as only a few weeks later we saw  Susannah McWhirter elected as Women's and Equalities officer at the GRA. Congratulations to all of them!

As the first Youth Officer for Maryhill and Springburn, I am pleased to be able to share some introductory thoughts on this new role, for me and the branch, and on other topical matters arising. I’ve been a member of the SNP since 2007 and been active in campaigning in Maryhill & Springburn and across Glasgow since the independence referendum in 2014. During this time, I have always felt welcome and very much part of the wider SNP team. A justifiable claim, especially now that we have nine elected members of our own in the branch! As part of a team of office bearers, I hope to play a role in continuing the good work the branch has been doing already, in terms of contacting voters across constituencies and building up a strong database of support. Working to support elected members (for once not in campaign mode!) and continuing to learn from and contribute to branch meetings with a political education focus. Principally, the idea of increasing youth participation in the branch is the right one. And I imagine I would share that ambition with most of you. The challenge, therefore, lies in how we begin reaching out and contacting younger members. Offering them a chance to help and take part or even just encouraging a wee visit to a branch meeting. That’s how I started! Going forward I will be speaking with Gavin Brownlie, organiser, looking at what data currently exists on youth membership, how we can actually identify younger members, and beginning to think of ways to open conversations, getting new faces involved as best we can. I look forward to reporting back on our efforts over the coming months. Of course, the official youth wing of the party is already running at full tilt! The Young Scots for Independence (YSI) movement has existed for some time and their Glasgow group was officially launched back in March this year. As well as our efforts to get in touch with younger members for the first time, it will also be important to tap into the existing pool of youngsters in Glasgow already active in campaigning, attending meetings and events of their own. A wee thought here: It might even be that if we can build a relationship with the current crop of young activists, this could help encourage new ones to begin participating alongside the YSI as members of Maryhill & Springburn. What do you think?

I, unfortunately, couldn’t make this year’s party conference in September. However, I read with interest that the YSI had proposed and passed a motion to increase the military entrance age to 18. We spoke about this at our pre-conference branch meeting too, where it was highlighted that opponents to the motion were Carol Monaghan MP - Armed Forces Spokeswoman for the SNP - and Stewart McDonald MP – Defence spokesman at Westminster. In all honesty, it puzzled me slightly that the party would throw such weight behind the opposition of a motion at conference. But reading their arguments and understanding that currently, recruits under the age of 18 do not serve in combat roles and haven’t done for the last 10 years. The motion also seemed inconsistent with young people currently able to vote, get married and have children in Scotland at the age of 16. Unfortunately, I think the message this motion sends is that young people can help make a decision on the future of their country in elections but not on the shape of their own careers. As a branch, we’ve been unfortunate over the last couple of years not to have submitted a motion or two of our own. I’m sure we can agree there was some other campaigning to be done during that time which rightfully took precedence, despite our good political discussions as a branch. With Brexit last year and then the council elections and a snap general election within two months of each other, it’s been a busy but engaging time for the branch. The ability to make a difference at local level during these last number of months has been hugely rewarding, especially since we won! All of them! Now, as the dust settles from the hard work of the last year, I’m looking forward to continuing our political discussions each month and hopefully beginning to help shape our own ideas for the conference next year. If you are interested in getting involved then please fill in the form below the equalities day post and I'll get back to you. Gordon Gow

The conference can seem a daunting event for someone with a disability but it shouldn't have to be. Recently there has been a concerted effort by the SNP to be more inclusive from Tasmina Ahmed- Sheikh hosting an Equalities Day which was held the day prior to the main Autumn conference, to the parties efforts to encourage people with disabilities to become more involved in politics, it is an encouraging time. Fiona Robertson, SNP Disabled Members Group delivered an impassioned and emotional speech about this governments treatment of disabled people and the damning UN findings. There was much to be applauded and encouraged at this conference. The Equalities day covered a whole range of issues from women's equalities to B.A.M.E. and L.G.B.T. issues. It did make time to include a whole afternoon devoted to discussions around disabled rights and equality. Whilst this is very much welcomed, (the SNP are the only party who host such an event), there is a long way to go to bring disability rights up to the standard generally accepted for able-bodied people. There are many small things that can be done to make the attending of the conference a more enjoyable, stress-free experience, the devil is in the detail after all. Fortunately, the SNP Disabled Members Group are a determined bunch, and with a new executive, are determined to push these issues to the fore, and not let the party slip backwards in moves to listen and include disabled people. I would encourage any branch members to become involved in making the SNP a truly inclusive party.

If you are interested in getting involved then please fill in the form below and I'll get back to you. Anne Ross

Get Campaigning! Get In Touch!

Our Equalities Officer, Youth Officer and Organiser want to hear from you! If you want to get more involved then please fill in the form below and they will get back to you.

Just click the links below to read all about what some of our elected members have been doing across the constituency. Cllr Graham Campbell Report November 2017 Cllr Cannon Report Nov 17 Bob Doris MSP Report Nov 2017

Whilst Theresa May and her Government stumble from one fiasco to another the SNP has been delivering for Scotland. Read all about it by clicking here.

Do you agree with Mhairi Black?

The evidence so far is that Universal Credit is causing unnecessary hardship, with families falling behind in rent payments and increasingly relying on emergency welfare support and foodbanks. Sign the petition to halt universal credit by clicking here.

The UK budget: what it means for you

The Chancellor, Philip Hammond, has delivered another Tory austerity budget that cuts funding for public services but protects the super-rich. Read more about what it means for you by clicking here.

Alyn Smith's diligent and enthusiastic work as an MEP since 2004 is distilled in this seminal piece 'Scotland IN Europe - Why EU Membership is best for Scotland.' To download a copy then please click here.

There is also an excellent interview with Alyn in Cable magazine read it by clicking here.
print